My journey to assertiveness 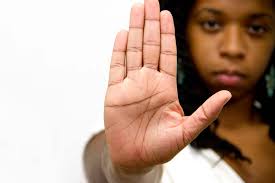 This post is from a Defend Yourself student, who says:

Setting boundaries has been hard for me. We women are conditioned to put others’ needs before our own. When I tried to set boundaries in the past I’d be called names, told I was ‘selfish,’ and was guilt-tripped until I caved. Caving worked in the short term, but it doesn’t work in the long run. Resentment gets built up, which is not healthy. I didn’t like being a pushover.

Through Defend Yourself, I learned the tools to set and maintain boundaries. At a recent job, one woman who I worked under grabbed my wrist when I was about to stamp a document in the wrong place. I would be afraid to speak up in instances like that at jobs in the past because being in a shaky financial situation I could not afford to lose those jobs. However, something in me sparked though I may be on the bottom rung at many of these jobs, I still felt I deserved respect.

I used a firm voice and told her, ‘You do not have to touch me like that.’ I set another boundary when she touched me again in another instance and reiterated that she did not need to touch me. She has not touched me inappropriately since. I have continued to set boundaries in other ways at this job and am proud of myself for doing such.

Setting boundaries is a two steps forward/two steps back thing. It’ll take time and repetition until it becomes easier for me to do. I realize that people will continue to call me names, lay guilt trips, and throw tantrums when they don’t get their way and it hurts, but thats on them, not me. Setting boundaries is about putting oneself first, and Im glad that I learned to put myself first.

Be the first to know

Get the latest empowering news